QUICK BIO
Although John Severson only appears once in the short version of the credits on the website here (he appears in more places on the final film credits), he brought some serious effort to PYRITE.  John was integral to the construction of the Blazen Platform, and he worked side-by-side with RJ Blazen in nearly every phase of construction.

He also filled in as everything from Production Manager to Gaffer to PA… and he worked alongside Jonathan Lacocque, PK Dow, and Eric Battersby on Hollywood 27’s follow-up project, the FTD DOCUMENTARY.

Of course his biggest to work to date is the award-winning film A PERFECT SOLDIER, which you can catch a glimpse of in the video on this page. 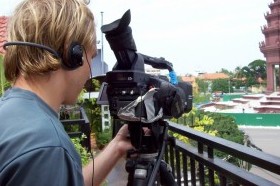