Do The Right Thing Turns 25!

Monday June 30th 2014 marks the 25th anniversary of Spike Lee’s Do The Right Thing theatrical release. I watched the film again about a year ago, and although the acting and directing don’t hold up quite as well as I remembered, the film still stands tall as an amazing and influential work. I wouldn’t hold any of its minor shortcomings against it either – Spike was still a very new director, and some of the film’s cast went on to become legendary after their first and/or somewhat breakout roles (Samuel Jackson anyone). I will watch it again tonight – and that’s the double truth, Ruth!

For all the accolades Spike’s received for the film, he most certainly had to feel an extra special hometown honor when Brooklyn Borough President Eric Adams recently designated June 30 as “Do the Right Thing” Day. Adams said, “Many people don’t realize how profound and powerful the movie ‘Do the Right Thing’ actually was. Spike created an image of Brooklyn that was beyond the headlines, beyond the stereotyping, beyond the negative images.” 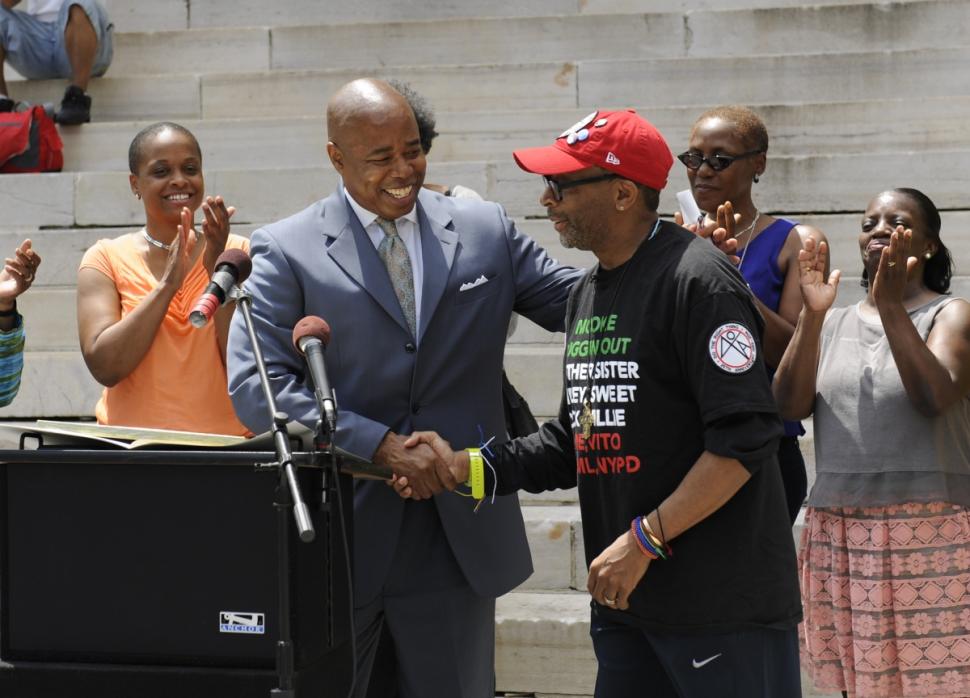 Spike Lee Honnored with Do The Right Thing Day in Brooklyn

“Do the Right Thing Day” will officially be Monday June 30th, but a Saturday block party in Bed-Stuy kicked things off. Spike emceed the event on Stuyvesant Ave. So make a great movie, get your own day – how cool is that?!

As for Do The Right Thing on a personal level, I readily admit that I have no idea where my own path would have led me if Do The Right Thing were absent from the landscape. I remember where I first saw the film… at the little Co-Ed Theater in the campus town area of Champaign, Illinois. And I can still remember what it felt like walking out of the theater with friends, like my brain was on overload, synapses firing in all directions, just not even sure how to process it.

And the number one feeling? Anger. I wanted to go find Spike and say to him was “Spike, why the hell did you have Mookie throw that garbage can through the window man!?!?! WHY?!” As a college kid school for filmmaking, I was seriously pissed off at him for making that creative decision – to just blow up the whole situation like he did.

That happened multiple times to me during college, a period where I watched more movies, between classes and a steady stream of trips to the theater, than any other in my life. And I soon realized that the rare film that could literally anger you from a plot point usually turned into something special. Do The Right Thing and my time spent talking, debating and gettin’ my learn on back then taught me a crucial lesson in the battle against racism – it’s not my place to judge a person of another race’s reaction. I knew had my finger on the pulse of the problem from a very young age (as evidenced by all the black people, friends and strangers, who flat out told me as much), but I didn’t quite realize the importance of honoring other people’s perspectives and experiences.

What I mean is that, when I’d run into a black guy that hated me for my skin color, as a white guy I immediately reacted defensively. A natural reaction to anyone throwing hate your way, of course, but racism is not a natural thing. It doesn’t play by any natural rules. And Spike’s film started a long process in my own soul where I truly tried to walk a mile in another man’s shoes so to speak (Walk A Mile Project roots in the making most def).

I’d already spent 4 years as a part-time minority by attending an 85% black high school (shout out to Proviso East!!), but when I walked out of the doors, the world shifted back on its axis for me. And the hard truth is, you can do your best to empathize with another human being on any of a thousand different trials and tribulations he or she may go through, but until you’ve been through the same trial or tribulation yourself, there’s a bridge you just can’t quite cross. If you are a white person living in the 21st century, and you wish that racism would go away, well… this is a concept that you need to understand. It’s not your place to get irritated when a black person holds you in contempt for whatever wrongs they’ve experienced in their own life. Say what you will, but even if you’ve undergone a very similar experience, you will never have done so from the perspective of being black (or any other race). So your barometer is off from the start. You won’t have the exact perspective, because your trying to read the situation with a faulty gauge. It’s a bridge you can come to, but can never cross.

In my own personal experience, coming to grips with this makes a huge difference. Now it doesn’t mean that you condone hate – ever. That’s not the point. Just because I don’t get pissed off when I hear someone hating on me based on their own life experience, that doesn’t mean I don’t challenge them on where they stand right now. Of course I do. But challenging someone from a place of respect and understanding lends itself to a completely different result versus challenging them out of reactionary anger. The latter leads nowhere, nearly every single time.

For me, wanting to kick Mookie’s ass for throwing that garbage can through the window took me way further down the path to enlightenment than anything I’d experienced before – and that included the high school experience of hanging out with black friends back in Maywood, Illinois and hearing that other people around us didn’t appreciate my presence simply because of my skin tone.

I’ll also say that, although PYRITE certainly can’t hold a candle to DO THE RIGHT THING, it stands on its own merits for its heart and the message behind it, and it likely wouldn’t exist if weren’t for Spike Lee. I make no secret of the fact that PYRITE is, in many ways, a white filmmaker’s “Fight Racism” tribute to DO THE RIGHT THING. And I’m proud of that, always will be.

So today, on a day to honor Spike’s amazing work from back in the day, I say thank you my brother, for inspiring people on all areas of the color spectrum to step it up. And in the words of The Mayor, “Always do the right thing.”

Click Here to download your free copy of The 3 Steps to Fighting Everyday Racism, the first of Hollywood 27’s 10-Minute Guides to help end racism.